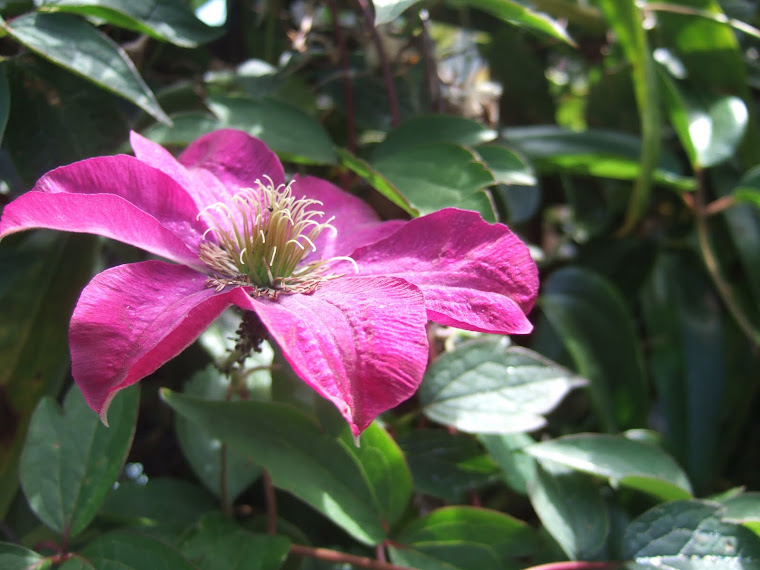 Okay, so I eventually get the hospital appointment at the Eastman at the TMJ clinic with Mr. Colin Hopper, an eminent maxillofacial surgeon. I am told that the most likely thing that has happened is that the disc in the jaw joint has been displaced and the solution is keyhole surgery, arthroscopy, to the jaw joint. I am told that under general anaesthetic they will look in each jaw joint, wash it out and mend any apparent damage to the disc and area. After much consideration I decide to undergo the procedure. This involves day surgery at the Victor Goldman suite at the Eastman Dental Hospital in London.
The procedure wasn't too bad, I had general anasthetic after all so what did I know! - the most unpleasant part was having to use a nasal spray as they would be incubating me via the nose rather than the throat due to the nature of the operation.

Anyway, to cut a very long story short, the operation showed that my joints were a right mess with lots of "sticky muck" in there! They were able to clean out the joints but were unable to see any problem with the disc which appeared to be in the correct position. Anyway, the final result was that they did all they could do but it didn't really make a lot of difference in the end - my mouth was unable to open any further than before.

So, I then had some further investigations - these being a CT scan and a 3D MRI scan showing the whole structure of the jaw.

The final conlcusion, after many months, was that a change had occured in the muscles that was irreversible and nothing much could be done.

I was told that there was nothing that could be done really. I was to go back regularly to the hospital to make sure that they limited opening wasn't getting anyworse and that there was no deteriation in my condition. If the opening were to start to reduce then the only thing they could do for me would be to give me a horrible operation, in the words of Mr. Hopper!, that wouldn't really be that successful anyway. They could detach the damaged muscle from the jaw, cut off the hardened, changed piece of muscle and reattach it to the jaw bone. I was told that the recovery would take a year and the finished result would be more than I had now!
Posted by Libby at 14:14 No comments:

So much to eat, so unable to eat:( 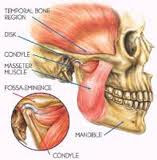 I am currently having a TMJ flare up. This means I do not have the ability or the desire to eat anything remotely hard or crunchy. TMJ should stand for Terribly Painful Jaw but actually stands for Temporo Mandibular Joint.

I have been unfortunately suffering from TMJ disorder for over 20 years and apart from the onset, which was very painful, I have remained for the main part pain free. But I do unfortunately have the occaisional painful flare up which usually lasts a few weeks (if lucky). Okay, long story below of my TMJ history for anyone who's interested - you have been warned: it's long, confusing, and probably just a tad boring.

Around 20 years ago I was dozing on the settee one evening, think I'd had a cold or something. As I sat up an enormous click came from my jaw joint, so loud that my OH heard it! It wasn't painful or anything, just very loud! Sometime after that I had a lot of aching around my mouth - my teeth would ache, my jaw would ache, my gums would ache, and it would move from one place to another willy nilly. Then from this my jaw began clicking a lot when opening and this was not a pleasant experience.
As time went on my jaw would then get stuck occasionally. I would be eating pizza for example and not able to open my mouth very far but then after a few minutes of chewing it would release.
Then after another period of time, my jaw would open so far and then snap shut, almost like it was held in place with rubber bands! All this was very worrying but as one usually does, I just waited to see what would happen. Eventually I went to the doctor who said take painkillers and to make sure that I kept opening and shutting my mouth.
After another few months I developed very bad pains around my jaw area and I was at work one morning when I could take it no longer and went to my dentist in tears. He saw me immediately and said that my jaw muscles had gone into spasm, gave me a muscle relaxant and made an urgent referral to the dental hospital. He said to take the muscle relaxant over the weekend and phone him on Monday. This I did and the muscle must have released as the pain went BUT I was unable to open my mouth any wider than about 1.5 centimetres-very scarey, and I seemed to have no strength in my jaw. Happy that the pain had gone, miserable that I couldn't open my mouth much I concentrated on regaining the strength in the muscle and waited for my hospital appointment. Over the course of a few months while waiting for the appointment I managed to eat better and my mouth gradually opened to around 2.25 centimetres where it has remained ever since.
The average person should be able to put 4 fingers between their front top and bottom teeth, but at 2.25 centimeters I can't even put 2.

Okay that's enough for one blog-more to come!!!
Posted by Libby at 09:47 No comments:

Everything in the garden's rosy (Huh??) 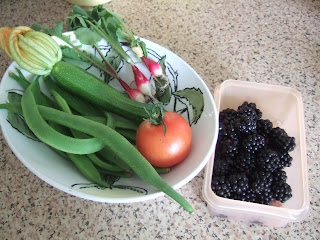 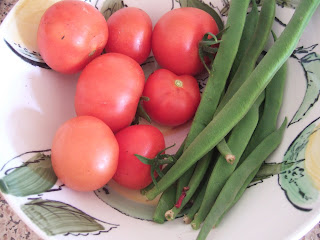 Well I have become really hooked on this vegetable growing lark. So far to date have picked loads of runner beans, a few ripe tomatoes (plenty more to come), a couple of chillies (reliably informed by OH that they are going from completely tasteless to getting a bit of heat in them), some radishes (which I've just discovered nobody in the family likes), some really tasty mini cucumbers (which everyone likes), a very bitter pepper (but loads more growing which I have patiently left to ripen), a few courgettes (of which there will probably be many more to come) and a few strawberries (which have now finished but have thrown up many runners which I am going to use next year).

I also have dwarf french beans which haven't even flowered yet, a couple of aubergines which I am restraining myself from picking too early, and a butternut squash plant which is probably much too late to expect to flower and yield an actual butternut squash.

Oh and some lettuce.
Oh and yesterday I remembered to look at the blackberry wilderness at the bottom of the garden and found some ripe blackberries too - so here's a picture of yesterdays total harvest